Father used to take me fishing on the river. We’d mix soap and water to pour onto the bank, to cleanse the dirt of its dirtiness, to cleanse the earth of its worms while small, round cellophane pillows tried to suffocate them. I scooped up their wet bodies, but they wiggled away from my hands, away from the hook, toward their home. Then the poke, slice, a coiling body clenched itself around metal tearing into it. A plop in the water. Trout attracted to the struggle bit and swallowed before the water became all-consuming.

I first felt Puah as a poke with her finger—constant, unwavering. A weathervane pointing west. A dulled bayonet. Then she became a fist of resistance during the push. Eyes barely open. Eyes the color of ashes. In my dreams, Puah is a trout before the hook. In my dreams, she is a worm before the soap. No gurgle in the water. No gasp for breath.

Note: According to Stanisława Leszczyńska, a survivor (and midwife as prisoner) of Auschwitz, at least 3,000 babies were born in Auschwitz. However, “Sister Klara,” a German midwife who was sent there for infanticide, drowned many of them immediately after birth in a bucket of water. Sometimes the children born with blue eyes were sent to Germany for adoption. 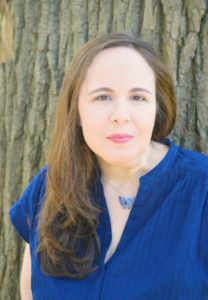 Liz Marlow’s debut chapbook, They Become Stars, was the winner of the 2019 Slapering Hol Press Chapbook Competition. Additionally, her work has appeared in The Bitter Oleander, the minnesota review, Permafrost, Valparaiso Poetry Review, and elsewhere.