There was once a woman who answered the question “How are you?” truthfully, without leaving anything out.   Don’t misunderstand:  She wasn’t boring or full of herself.  Rather, she was empty, with only a knot in her gut—not a stomach tied in knots, but a single knot, which was sometimes a “knot” and sometimes simply “not,” as in “Not well,” “Not good,” or “Not myself today or tomorrow or next year.”

English was not her first language.  It was not even her second language.  Before becoming empty, she kept a book under the bed in the apartment in Springfield Gardens: “The Blue Book of Grammar and Punctuation, An Easy-to-Use Guide.”  Alas, this guide wasn’t easy to use.  Her husband saw it and was suspicious.  What was it doing there? Who gave it to her? Was a man at the hotel where she worked teaching her English?  The woman answered truthfully: She’d found the book, left by a hotel guest.  Man or woman?  She didn’t know.  The bed in that room was a king, sheets rumpled, blankets tossed—a couple, surely.  Her husband yelled that she had to return it; it wasn’t hers; the guest might have remembered it later.  If she didn’t return it, he’d call the hotel and say she was a thief.   She’d be deported!  Now she’d better tell the truth.  Who gave her the book?  What man?

Her husband had lots of questions, but none of them was “How are you?”

Later, she turned the pages, trying to memorize the lessons, but knew she couldn’t.  She found a new hiding place, behind the rags underneath the kitchen sink.  She worried then about dampness, about mildewed pages and stains.  She worried about giving in too often.  She worried that she herself was “easy to use.” The Blue Book used “real world” examples.  She wanted to raise her hand, wave it like the overeager fifth-grader she’d been in Recife, and cry:  Here! Me! or perhaps (given this confusing language), Hear me!

How do you answer the question, “How are you?”

She never even knew what her husband was asking.  How could she possibly know what anyone else was thinking?

At the police station, when the female officer asked, “How are you?” the woman thought of the book in the apartment in Springfield Gardens, its spine cracked, its pages bloody and torn.

Then she thought a long time before answering. 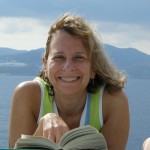 Nancy Ludmerer’s fiction has appeared in The Kenyon Review, North American Review, Cimarron  Review, Sou’wester, Green Mountains Review and elsewhere.  Her flash fiction has won awards from  Grain, Night Train, Southeast Review, and River Styx, and has been read aloud on “Word by Word,” an  NPR-affiliated radio show.  Nancy practices law and lives in New York City with her husband Malcolm  and cat Sandy, a brave refugee from Hurricane Sandy.