Eventually the truth became too obvious to ignore: all the fiction writers realized they were actually poets.

“But this won’t do,” said Max. “We’ll never make any money writing poetry.”

“Well,” I said, “we weren’t making any money writing fiction, either.”

“But we might have,” said Dylan. “If we published our novels. And sold the film rights.”

“Well,” said Taylor, “at least we can still get teaching jobs.”

“Max,” I said, “if you care so much about money, why did you bother to become a writer in the first place?”

“I was trying to be a fiction writer,” Max lamented. “But now it turns out I’m just a poet!”

“But what’s so bad about being a poet?” asked Julia, the only poet among us who had actually been a poet all along.

All the fiction writers who were now poets stayed silent, looking at the ceiling like maybe it would have the answer.

“It’s not about the money,” the ceiling said. “You’re all talking about jobs and money and how to make money, but the money isn’t really the problem.”

Max sniffed. His handsome face had gone all red. Maybe he’s allergic to poetry, I thought. I checked my own wrists for hives.

“No,” said Dylan. “What the ceiling is saying is right. It’s not about the money. Not really.”

“Then what is it about?” asked Max.

Dylan sighed. She glanced up at the ceiling again, but the ceiling had had enough; it was fed up and didn’t want to talk any more. “It’s very upsetting to think you’re one thing and then turn out to be something else,” Dylan said.

We all nodded solemnly, considering this point. Surely newly hatched butterflies were alarmed not to be caterpillars anymore, even if it did mean they could fly. A lot of butterflies probably came out of their cocoons depressed, thinking: Who am I now? Who the hell am I? I miss being green! I miss crawling around on the ground!

And Julia laughed at this, having taken up a paintbrush from somewhere during this whole exchange and streaked her arms in pink and blue and purple colors, which were now getting all over the white chairs on the porch. 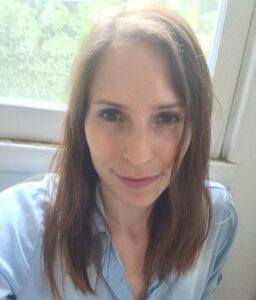 Susan Holcomb holds an MFA in writing from the Vermont College of Fine Arts and studied for a PhD in physics at Cornell. Her writing has been published in the Southern Indiana Review, The Boston Globe, and elsewhere. She lives in Los Angeles with her husband and newborn daughter.